Fish out of water — My best tarpon fishing tale yet 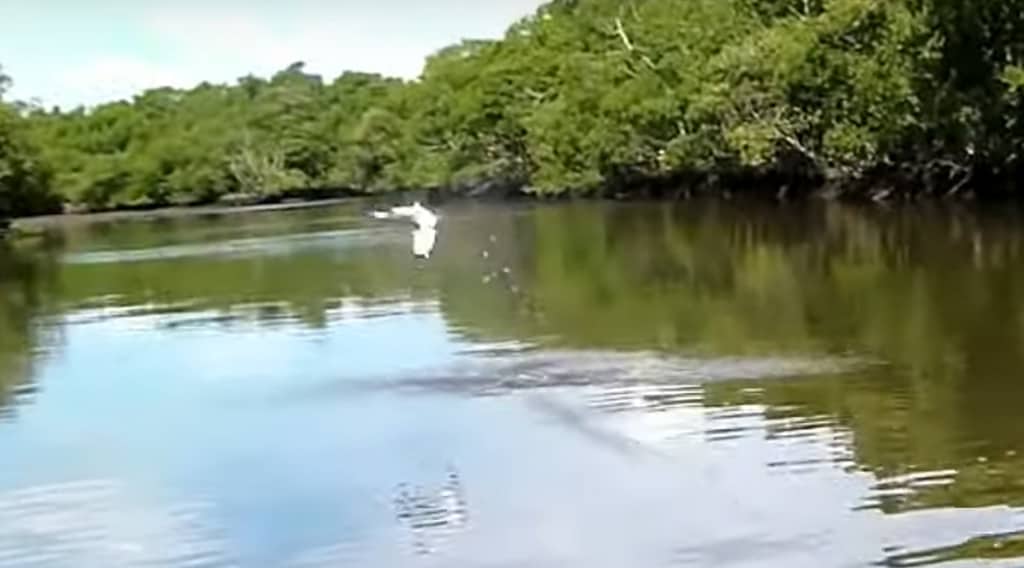 On the heels of some very intense March wind, I ran one of my Islamorada fishing charters 40 miles from Islamorada to the far northwest corner of Everglades National Park in search of tarpon. After the long trek across Florida Bay, my anglers (Joe Marley and his oldest son Paul) and I were very pleased to spot a few tarpon rolling inside a small creek.

Armed with mullet and ladyfish, we took a long drift down the narrow creek but unfortunately were not rewarded with any bites. At the end of the drift, we decided to start the engine and putt back to the top of the drift and try again. Instead of bringing the live baits back in the boat and placing them in the live well like I usually do, I decided to let them drag the baits behind the boat instead. Paul was dragging his ladyfish in the prop wash about 15 feet behind the engine when all of the sudden there was a huge explosion behind the boat that caught us all off guard. The explosion in the water was the result of about a 70 lb tarpon inhaling Paul’s ladyfish with great enthusiasm. Just having a fish of that size eat a bait in the prop wash so close to the boat was exciting enough but what happened next is something that none of us will ever forget.
Now for the rest of the story, please keep in mind the creek we were fishing was carved through the mangroves by mother nature herself and spanned about 50-feet across. In typical tarpon fashion, the fish took off like a freight train and began jumping wildly. Before we knew it, the massive fish was making a bee line for the tree line and suddenly launched itself deep into the dry tangled web of mangroves. We could tell the fishing line had parted from the fish but the show was far from over.

The tarpon, now high and dry, began wildly flopping around on top of the mangroves catapulting itself up to 6 feet in the air and crashing down cracking branches and sending mangrove debris flying in all directions. In what seemed like an eternity but was probably only about 20 seconds of watching this “fish out of water,” the bedraggled and confused tarpon somehow managed to get itself back where he belonged and quickly disappeared into the brackish backcountry water. The three of us were left there, jaws dropped and processing what we had just witnessed. While thankful the fish had made it safely back into the water, we were also regretful we had not had time to capture the incredibly unlikely scene on one of the three cameras we had on board. But oh well, what we did have was one great fish tale to tell about the one that got away!