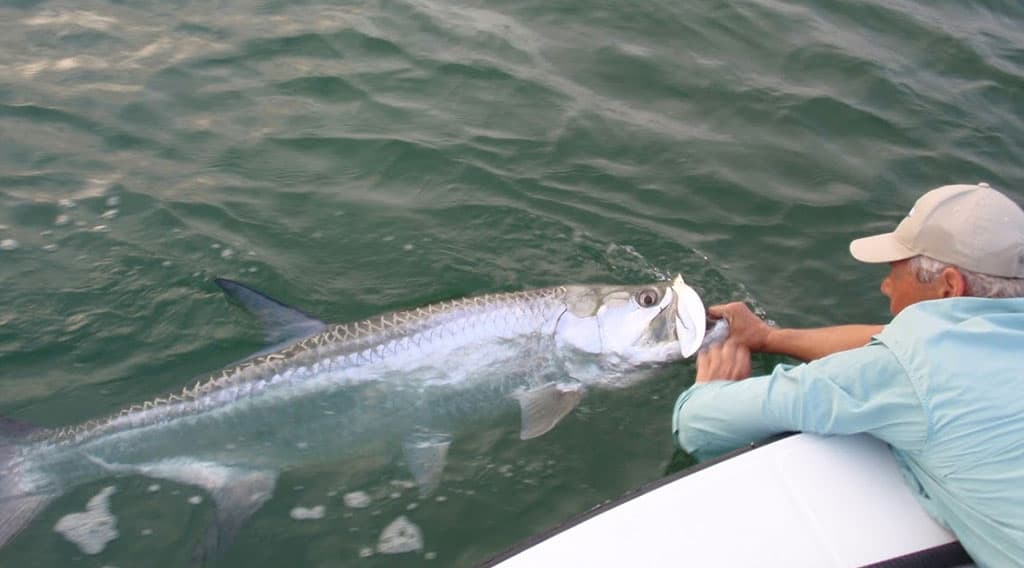 First, in order to get the fish in the position to even take a picture usually is the result of some serious tarpon wrestling. The wrestle involves me getting extremely wet, slimey, often throwing out my back and nearly breaking my arms. During the wrestle, I have many safety concerns including my angler, myself, the fish and the my equipment. The reaction of the fish can be very unpredictable and I need to have the person who caught the fish holding the rod on the ready in case the fish gets loose which happens a lot. Additionally, he or she is usually pretty exhausted after a long fight and the handling of the fish is hard work they want no part of under the circumstances.

Interestingly, most veteran guides don’t even attempt to get the “along the boatside” picture. They merely wrap their hand in the leader and “pop off” the tarpon. In fact, the best and most experienced Florida Keys fishing guide I know has a razor knife on the end of a broom stick to “release” tarpon. For him, touching the tarpon for a photo isn’t even an option.

Finally the main reason I like to be the one holding the tarpon is simply for the safety of the fish. On the rare occasion that I’ve let my angler don the gloves and wrangle the tarpon for the picture he usually gets excited and mishandles the fish, much to the detriment of the tarpon. Even if the angler manages not to manhandle the fish for the picture they inevitably lose hold of the fish at some point boatside when it struggles and the tired, over-photographed fish spirals downward toward the bottom, unrevived and primed for shark attack. While it may seem egotistical that I’m in every tarpon photo you’ve seen taken from my boat, the real reason is that nearly every time I turn over the reigns to my tired anglers to handle their fish it never turns out well either for the fish or the photographer.

Now with all this said, I don’t want to appear that I am completely against my anglers getting a photo holding their tarpon by themselves. So when we are lucky enough to get to that point, by all means, I will do what I can to coach the angler for a great photo-op as long as the situation stays safe for everyone involved with my priority being the well-being of the fish.