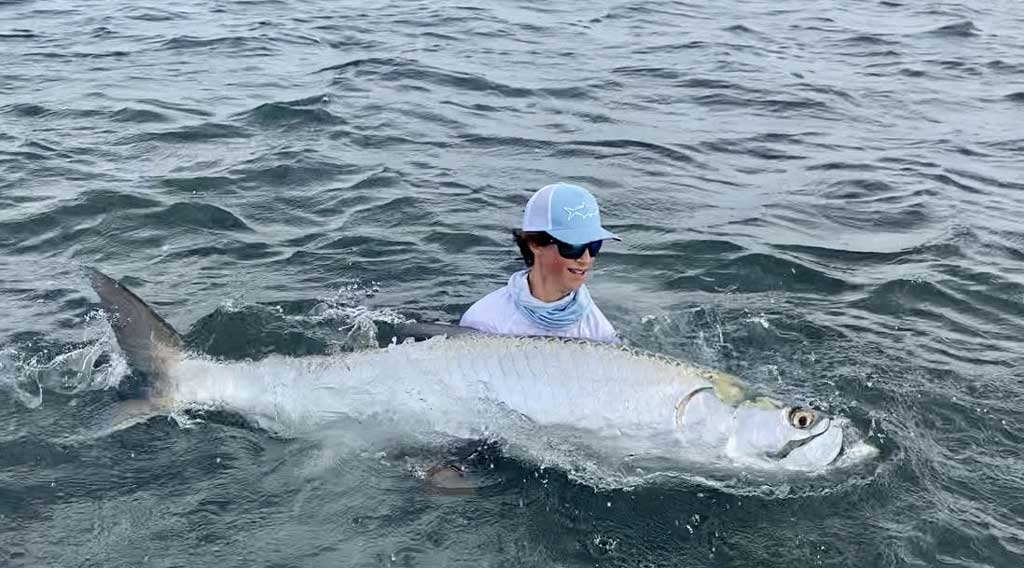 Tarpon fishing in Florida Keys is at the top of many fishermens’ bucket lists and actually releasing a trophy tarpon can take a lifetime of trying. But young Matias Raponi, down fishing in the Florida Keys from Atlanta, GA, he made it look easy.

Given Matias at 14-years-old is a pretty accomplished young angler, he still need all the right conditions and little luck to check his trophy tarpon release box. In early June 2020, days after the Florida Keys re-opened after being shut down for months due to concerns over Covid-19, he got the chance to go on a guided tarpon fishing trip in Islamorada.

The magic happened on just the second drift of the evening in the famed “tarpon alley” in Islamorada, when a bohemeth tarpon flashed and boiled up on a frisky crab. Matias knew what to do when he came tight on the big fish. He reeled the fish onto the hook like a pro and instinctively bowed to the silver king on every jump. Like many big fish do in the strong currents, this beast bee-lined for the bridge. Matias was able to negotiate through the tricky barnacle encrusted viaduct of the bridge without a hitch and continued the fight out in the open ocean waters. After about an hour of manuevering back and forth between a nearby flat and the channel, Matias finally tired the fish enough to get him boatside for the release.

As a rule, tarpon over 40 inches MUST remain in the water. [Read more about safe handling tips for tarpon fishing photo ops] Knowing this was potentially a fish of a lifetime, Matias was eager to take advantage of the perfect set up he found himself in to experience a tarpon release that few people will ever have. Because the fish fight ended in three feet of water on an oceanside flat, he was able to hop in and gently support the 130 lb tarpon for dehooking and a capture a quick Instagram moment in the water. The best part was watching the monster fish safely swim away while Matias high-fived me and his proud father.

See this epic tarpon fishing in the Florida Keys for yourself in the video below.